Happy Monday, Friends!  I hope you had a great weekend, and your week has gotten off a great start!  We pretty much chilled after having the busy week that I had last week… with LOTS of ice cream.  Yesterday was National Ice Cream Day, much welcomed by Miss Baby.  She had a total of 4 rounds of ice cream yesterday, starting from breakfast!

Last week wrapped up the construction portion of Thread Journey Quilt-Along on Aurifil’s blog. If you haven’t joined in the fun, and would still like to… there is time!  We are having a one-month break for quilters to get caught up before diving into the quilting portion of the quilt.

Click here, here, here for Parts 1-3 of the construction of the Quilt Top.  The quilt ends up finishing at approximately 54″ x 54″.  It is not too daunting a task to complete the quilt top.  Please send me pictures of your quilts so that I can share them with everyone!

Meanwhile, Miriam and Jody sent pictures of their quilt tops with the Ohio Star border.  Look at their beautiful versions – well done, Ladies! 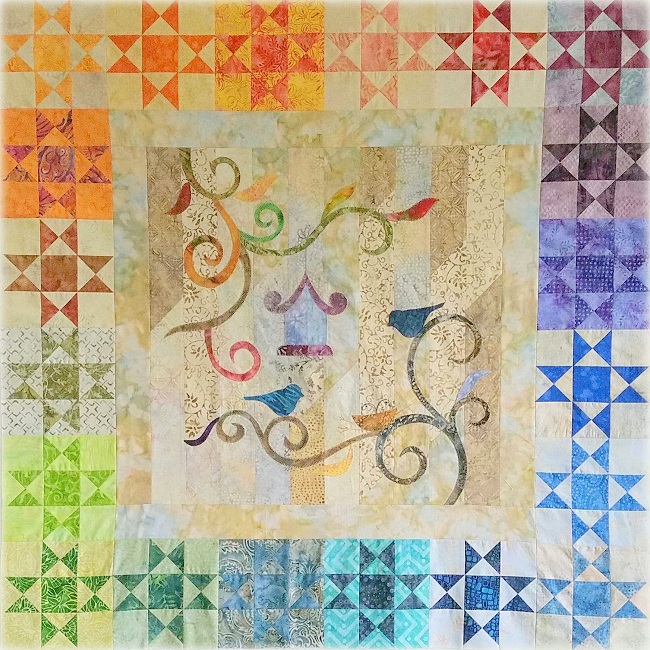 Meanwhile, here is another Sawtooth Star quilt pattern to share with you today… It’s my Sparkler design using Windham Fabrics’ new 30′ fabrics Feedsack.  I am beginning to think something is amiss with my designing mind and Sawtooth Stars. HA! 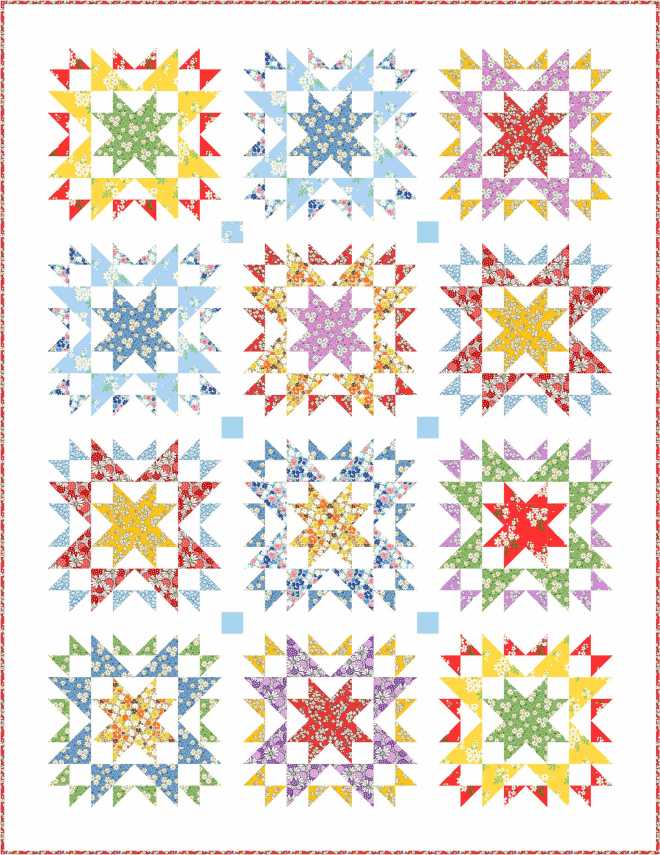 You can purchase the kit for a limited time here.

So — are you a 30’s fabrics person?!  I actually am, and have been hoarding quite a bit for myself to recreate an antique quilt.  I just need a bit of extra time to get started in drafting the quilt block.

Thank you for stopping by.  Have a lovely rest of your week!  Hugs to you all.

Fons and Porter Love of Quilting (March/April 2016): Constellation of Stars

Happy Monday, Friends, I hope you have had a good weekend!  My quilting angels did it again… they were able to make yet another quilt happen for me.  I spent Friday night binding the quilt, and was able to ship off the following day Constellation of Colors! 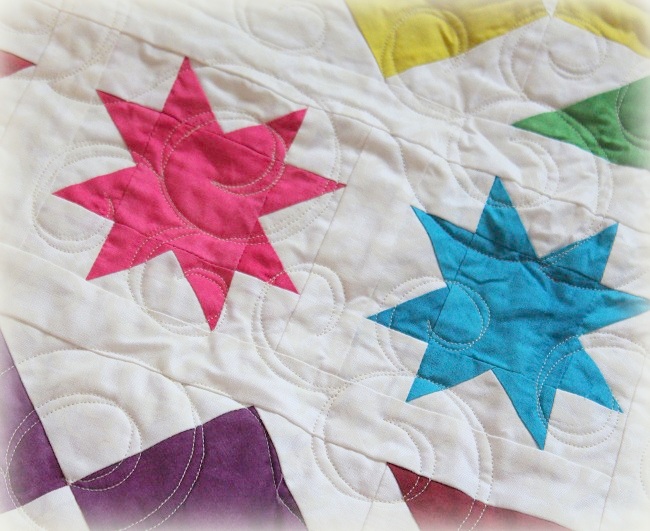 You know I have a Sawtooth Star Block fanatic!  Click here to see my other Sawtooth Star quilts.  Today I am sharing with you the second installment on my Virtual Trunk Show of my Sawtooth Star Quilts! Click on the quilt names for more information on individual quilts.

1.  FRESH OFF THE PRESS – All That Glitters (American Patchwork & Quilting, December 2015) 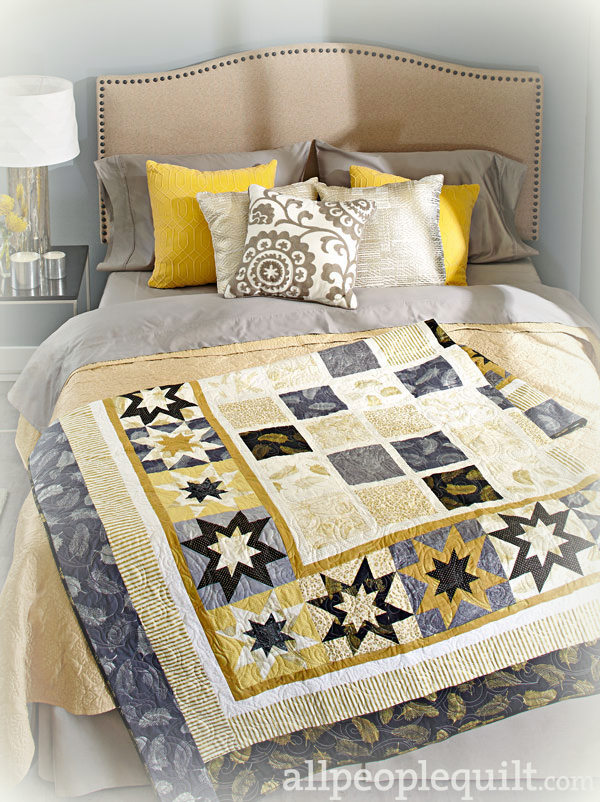 2.  Get Happy (American Patchwork & Quilting Calendar 2015 for the month of March)

4.  Tutu Cute Twin Quilt and Floor Pillow, a free to use pattern for Quilting Treasures

6.  Shimmery Constellations, a free to use pattern for Benartex

Thank you for stopping by.  I have exactly 10 days before I leave for Market.  It’s crunch time again… so, I shall run for now!

Hello Friends, thank you for dropping by again.  I hope you are well.  I thought I would devote today’s post on my Sawtooth Star quilts.  This is what I meant by the very basic Sawtooth Star block.

It’s time for me to confess that I have a quilty guilty pleasure — I am on a personal quest to see just how many ways I can use the beloved Sawtooth Star blocks in my quilts.  So here goes… at least for Part 1!  You may click on the quilt names to view more pictures of the quilts. 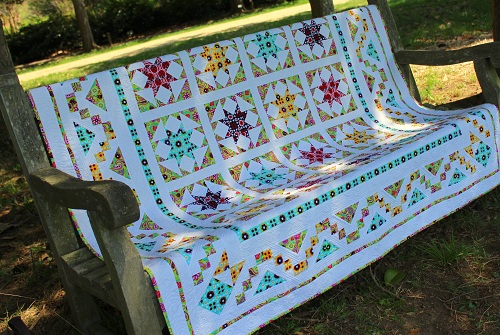 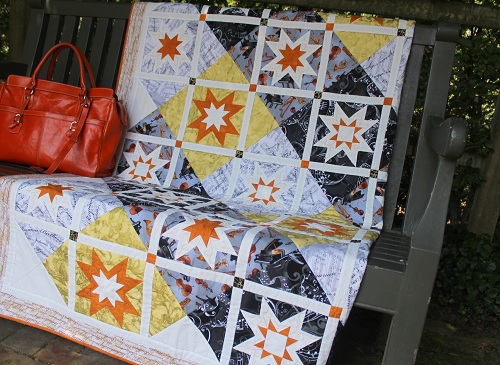 So, curious mind wants to know if you have a favorite from this round of Sawtooth Star quilts?

And… can anyone tell me why quilty and guilty don’t rhyme even if they only differ in the first letter?!  The English language is such a beautiful language, but it can, at times, annoyingly defies any logical deductions!  Did you know I used to want to major in English and be an English teacher?

Alrightie – back to work I go.  More work came in when I checked my email after we got back from our mall adventure today.  It was a fun outing — and our chat was about Charlotte’s Web (the book).  Miss Baby wanted to tell me all about the Wilbur facts, as she calls them.  I got her a “Wilbur” magnetic bookmark for her copy of Charlotte’s Web. :)  “Wilbur” is part of a set of magnetic bookmarks that come in a pack of 6, and you can purchase them online here.  They are perfect for someone who reads multiple books at a time.

I shall catch up with you later!

Hello Friends, it’s lovely to have you visit again!  This is another overdue post of an editorial feature that has been official for a couple of months… but I am glad I am finally getting to it, and it is the last one in my pile of overdue posts.  Meet Stardom that is featured in Annie’s book Row Quilts – Longitudes & Latitudes.   The book is available for purchase here.

Stardom  is a music themed quilt that features different variations of the sawtooth star blocks.

Isn’t the Sawtooth Star one of the most fun blocks, ever? 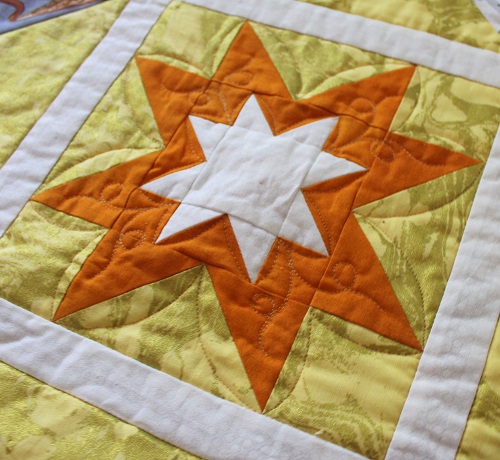 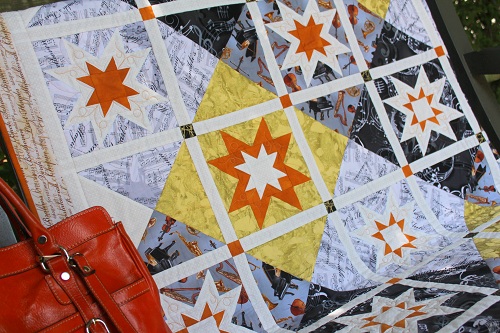 Stardom uses fabrics from Benartex’s Concerto fabrics!  These fabrics are MUST HAVES for music lovers!  Click here to view what this fabric range has to offer. 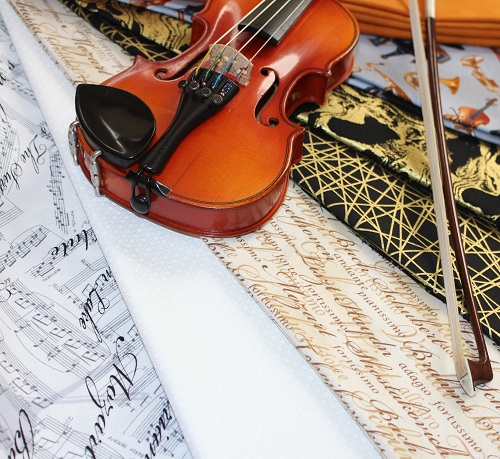 I used the “Composer’s Ombre Gold” swatch in the border — I love love love this swatch!

I pieced and quilted the quilt with Aurifil Mako 50 Cotton threads – no surprise there, right?!  Batting is Hobbs‘ Tuscany silk batt.  I have talked about my choices of thread and batting here, and here.

My Miss Baby had another milestone over last weekend.  The little Miss had her first recital! 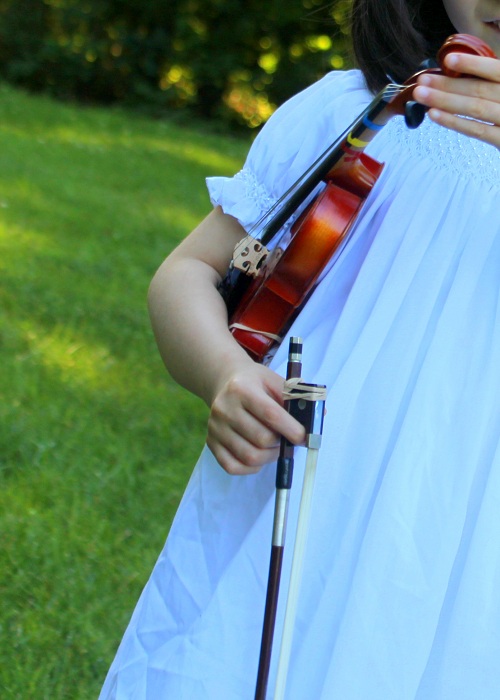 I was thoroughly stressed out over it, but not Miss Baby.  She did fine.  It seems a bit silly now thinking about just how stressed I was. 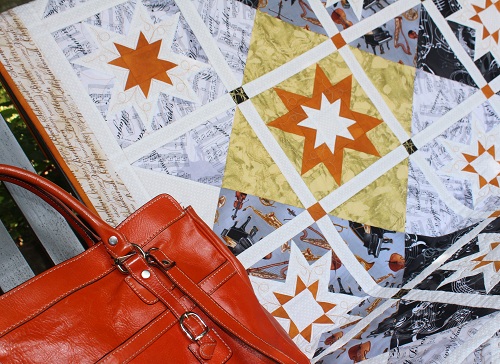 Thank you again for stopping by!  I hope you have liked Stardom.  I shall catch up with you later, after I catch up on a bit of rest!

Free to use designs: