Happy Friday, Friends!  I hope you are well.  My week just flew by this week, and we are looking into a snowy weekend according to the weather forecast.  I am happy to be participating in Sew in Love {with Fabric}’s Novelty Prints blog hop this week: 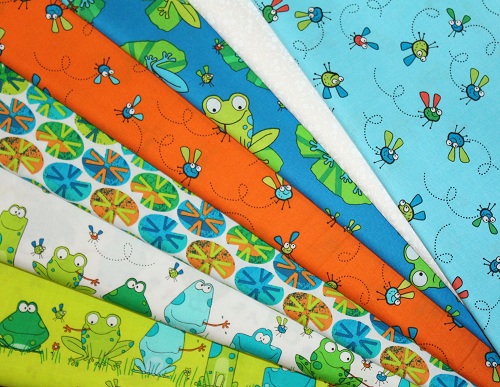 … because I have shared about the free to use pattern (In The Pond) here,

For the hop project, I am sharing a quick pillow storage project to store things for Miss Baby.

Head on over to Sew in Love {with Fabric} for the tutorial and for leaving comments.  Be sure you check out the other fun projects in the hop as well.  I am turning off comments for this post.

Thanks for stopping by!  I hope you have a blessed weekend.  I was gone earlier this week — so, it will be a working weekend for me.  Take care, my dear friends!

Click the following links for my past blog hop participations at Sew in Love {with Fabric}:

Hello Friends, I am happy to share with you today my Hoppity Hop quilt, featured in Fons and Porter‘s Easy Quilts (Winter 2014).  This is technically a leftover feature from 2014 that I didn’t manage to get to sharing before the New Year.

Hoppity Hop was such a fun quilt to make I would make it again! 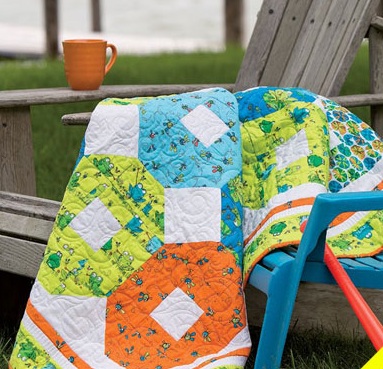 The quilt features rectangular  lily pad blocks (with a twist!) that are really easy to construct.  Plus the fun and cheerful fabrics from Benartex’s Leap Frog will certainly make one smile.  Click here to view the fabrics. 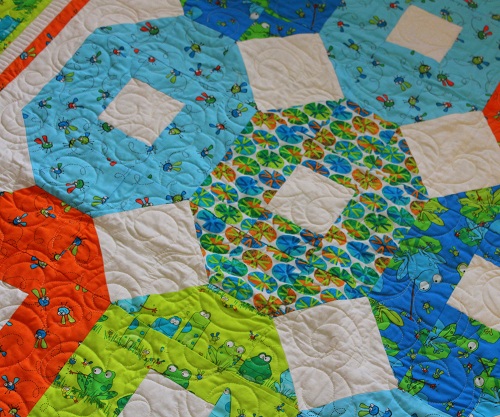 Quilting is done with Aurifil Mako 50 cotton thread over Hobbs Tuscany silk batting! I used my Jester’s Hat allover motif.  My Jester’s Hat motif (here, here, and here) has become my “stippling” in that I have used it a lot for utility quilt designs, and also when I have limited time in getting a quilt finished.

You can also see I tried quilting rounded zig zags in one of the inner borders.  Not perfect for a first attempt, but I did learn something to carry me forward. 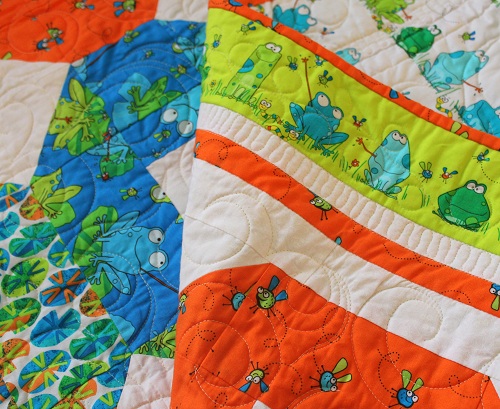 You know, every so often, I end up really really liking the back of a quilt!  And it is certainly the case with Hoppity Hop.  You can see why…

These frogs are fun!  I actually have fond memories of frogs.  I remember my mother drawing out a frog for me on a piece of paper to identify the various parts of a frog in preparation for an exam when I was in first grade.  And of course, I used to try to catch the tadpoles that hatched in a ditch by where I lived as a teenager (no joke – I was at least 15 or 16 years old then!), ha. I wonder how many teenage girls out there empathize with my tadpole catching, frog egg watching experiences. But then, my life was simple growing up in the tropics…

You can see why the free-to-use pattern I designed for Benartex, At The Pond, really struck a chord. You may click here for information on downloading the pattern instructions.

I guess this will be the last time I will show my 2014 line up.  But I am already starting to have a 2015 lineup when I share about my next feature quilt.  Before you completely hop off the Hoppity Hop train, do head on to Sew In Love with {fabric}, would you?  There are a few more Hoppity Hop facts you might like to know… Also, if you want to be kept updated on new Benartex releases, that’s the blog to be!

With that, I shall hop off.  I have a very very two days where I have to get A LOT of things done. Have a great weekend, my Dear Friends!  I will see you next week.

The Quilter (August/September 2014): Song of Praise

October: At the Pond using Leap Frog by Benartex

November: Sew Lovely using Made With Love by Benartex

Happy Monday, Dear Friends! I hope your week got off with a rousing start! I am feeling a bit disoriented from the things I have to get done before I leave for Fall Market next week. So, this will be a quick post… :)
Do you remember these fabrics?

These fabrics are from Benartex’s Leap Frog fabric collection.  I designed a free-to-use design using fabrics from the same collection: At the Pond.

I like this fun pattern – I can see it done for a kid’s playroom, especially for a boy, or an adventurous girl who loves bugs!

Thank you for stopping by, Dear Friends.  I need to hop (pun intended!) for now to get back to work.  You all take care, and have a lovely week!

October: At the Pond using Leap Frog by Benartex

(Making) a block a day keeps the UFOs 🛸 away!
Pillow & the quilt! (Kind of like Prokofiev's Peter & the Wolf 🐺) 😂
Follow Ivory Spring on WordPress.com