“… You know, Santa Claus and ho-ho-ho, and mistletoe and presents to pretty girls…” ~Lucy van Pelt in A Charlie Brown Christmas

Hello Friends, I hope you have had lovely week.

And today, I am happy to share with you another free to use pattern called Santa’s Sleigh.  You have probably seen the quilt in the following ad, featured in the July/August 2014 issue of McCall’s Quilting.

Santa’s Sleigh is a teamwork effort – I had designed the pieced portion, while Lynette Anderson designed the applique and stitchery portion.  And for the record, I always love working with the amazing Lynette!

And here are a few pictures of the quilt (hanging at RJR’s booth) I managed to snap at Spring Market in Pittsburgh last month.  This sample you see was made by Kay Harmon, who is a great designer herself!  The beautiful quilting is done by Sew Graceful Quilting. 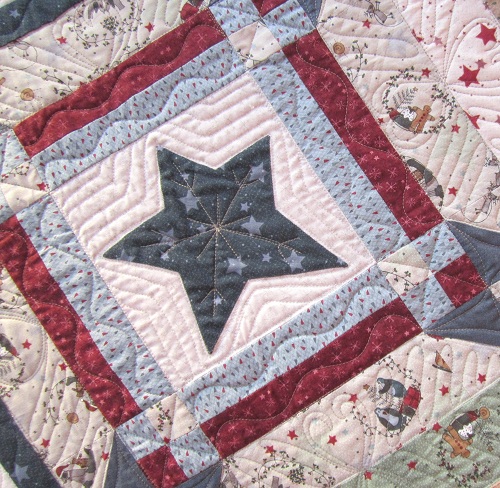 I hope you will enjoy making Santa’s Sleigh!

Thanks for stopping by, Dear Friends.  I am running behind this week because I keep finding myself oversleeping! :(  I shall catch up with you later.  Hugs to you all, and God bless!